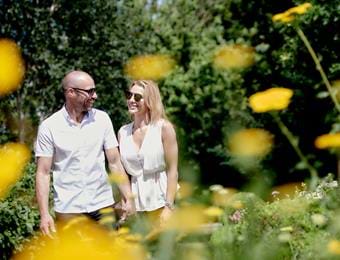 A little taste of luxury

Treat yourselves to pure luxury with our dining package – a must for food lovers.

In the morning, enjoy a full English breakfast served in Mr Kennedy’s Brasserie

“Our elegant dining room is named in honour of Slaley Hall’s first owner, Charles Samuel Hunting.
Charles was born in nearby Durham in 1853 and worked in his father’s shipping business firstly learning the ropes as an able seaman before engineering and eventually ownership of a number of freight ships.
Charles and his wife Agnes, had 8 children. In 1914, in his later life, Charles, Agnes and two of their children, Gerald and Althea and 2 grandchildren, moved into Slaley Hall after the building was extended, and transformed from the swampy, marshland known in the 18th Century as Bog Hall Farm. His particular passion was the creation of the gardens, lake and south-facing rose garden - all still visible today.
Charles passed away in 1921, but many memories, photographs and historic information about the Hunting family are held with the concierge team.”